Occasionally after an upgrade such as a service pack or CU, the SharePoint Products Configuration Wizard (PSConfig) can get stuck. It may happen on one or more servers in your farm. In my case, it happened on my dev box on step 9. Here are the steps to get things moving again. On the server with the issue perform the following: 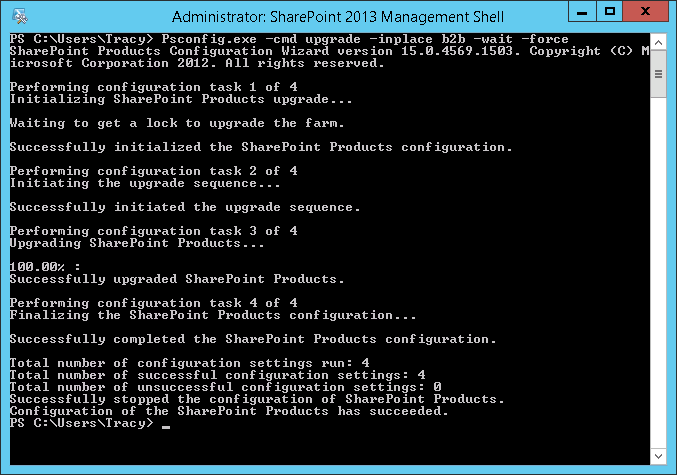 Now in Central Administration and navigate to Upgrade and Migration > Check Upgrade Status. You can verify the upgrade completed successfully. 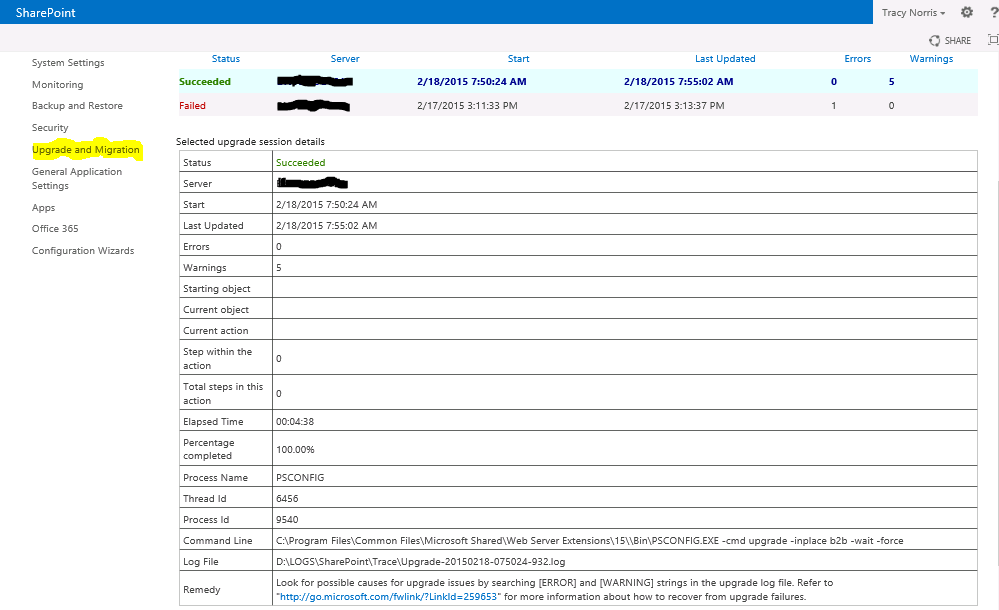 If you are clever, you may have noticed there is order to my previous posts. This is by design. I've been guiding my readers through a step-by-step process of setting up a SharePoint 2013 farm. I know, I'm tricky sometimes!

I did this not only for my readers, but also for myself. I have a terrible memory and so this blog helps me to keep my notes in order. Here is the culmination of all my latest blogging efforts in the order needed to build a SharePoint 2013 farm.

And that's it! 20 "simple" steps to  install SharePoint. Ok, I know it's not simple, but it's not too bad when you have it all organized. Good luck!


Distributed Cache problems have been prevalent on SharePoint 2013. To try to circumvent these issues, you should do an AppFabric update on all your servers as part of your initial SharePoint 2013 installation.

In the past, cache updates for SharePoint would be included as part of SharePoint patches. This time around, cache is separated from SharePoint in AppFabric updates. So add that to your list of patches to watch when you are updating SharePoint 2013.

If your SharePoint is in production, you should stop the distributed cache service first on the server you will update. Then the cache will move to another one of your servers set up with distributed cache. You may want to check out my post The number of Distributed Cache hosts in the farm exceeds the recommended value (SharePoint 2013) to see where your cache should be set up.

To stop the cache on a server, run SharePoint management shell as an administrator and run the following commands:

Now you're ready to install the latest AppFabric patch. At the time of this writing, they were up to CU5 – KB2932678. This install is easy, just follow the directions.

Next you need to update the DistributedCacheService.exe.config file. This is due to an update that was released in CU3 – KB2787717. You wouldn't know you needed to update the config file unless you read all the write-ups on all the CUs. A new background garbage collector was implemented in this CU. The config file is located at C:\Program Files\AppFabric 1.1 for Windows Server folder and the update is:

Now your ready to start the Distributed Cache service again:

Now, do this on all your distributed cache servers one at a time.

For some people, this is enough and the service will work again. This didn't quite do it for me. I had to actually unprovision the distributed cache service and reprovision it again to it to work. Here are the steps to do that:
Then provision it again:

1) Run SharePoint 2013 Management Shell as your install account because it needs a high level of permissions to perform this action.

2) On your app servers only, run the following cmdlet:


In addition to the svchost.exe memory leak issue I mentioned in my last article, I also noticed memory leaks for the noderunner. In searching the Web, I discovered this is a fairly common issue with SharePoint 2013. I've made this step a part of my SharePoint 2013 deployment. Below are the steps to resolve the issue:

The node runner application used by SharePoint 2013 preview for search related process slows down the system due to memory leak issues.

2. Open the config file at C:\Program Files\Microsoft Office Servers\15.0\Search\Runtime\1.0\noderunner.exe.config and change the value of  memoryLimitMegabytes to 200. This sets the maximum limit for memory use.

I found anything less than 200 caused search to fail on my farm.